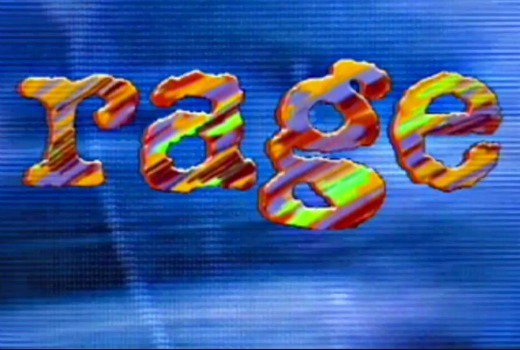 Recently the music video marathon Rage turned 30, a milestone that will mean much to the generations who have tuned in, rocked on or chilled out, and how to celebrate turning thirty? Why with large balloon numbers of course!

“We always have a pretty consistent audience and have done throughout the years and it’s always really popular with a lot of teens. When people start going out to gigs and maybe watching a bit less TV in their 20s, it drops off, but it is a show we find people return to, maybe later in their 30s or when they start having kids,” says rage producer Tyson Koh.

“It’s an opportunity to just switch off somewhat and let the music and images wash over you.

“There’s something to be said in this age of almost-paralysing choice when it comes to media and content, to be a passive viewer -to just sit there and watch something that’s already curated for you either by the producers or by the guest programmers,” .

Rage is unique that after 30 years it is beamed all over the country in cities and rural areas with “A lot of people within the organisation and a few people outside really stood up for the program and ensured that we were still going to air. At this point in time it probably is one of the cheapest shows to produce on the network, because most of the content comes to us from the artist and record labels.

“We’re able to produce over 20 hours of television every week,” he says, “so it’s a very cost effective show. I don’t think there’s too much more that they can cut …although I’m constantly surprised around this joint!”

On Monday ABC marks its anniversary with the first of 2 specials, The Story of Rage while Stories from the Red Couch screens on Friday.

“The Story of Rage is a look at how rage began and some of the people involved throughout the years, interviewing some of the musicians we’ve had there, clips played on the show and rage’s cultural significance within Australia.

“It interviews producers who have worked on the show and there are new interviews with people like Jimmy Barnes, Midnight Oil, Christine Anu, The Preatures.

“Stories from the Red Couch, hosted by Kate Cebrano, pulls out some stand-out moments from guest programmers over the last 30 years.

Depending on how we define a music TV program, rage runs only second to Eurovision in longevity globally, and has outlasted local peers including Video Hits.

“A lot of artists who come here, particularly the younger ones who might not have heard of rage, are just shocked that in Australia there’s a show that will still not only play music videos but will play quite abstract and alternative music videos. Not just commercial content.

“So it’s quite unique what we what we have here and something that we’re really proud of.”

So from us here at Magic in the Middle – A Big Happy 30th Birthday Rage.